Have you ever wondered which of Cisco CCIEs, influencers, and thought leaders are on Twitter?

Here is a list of seven of the most influential and impressive CCIEs you must follow and why. 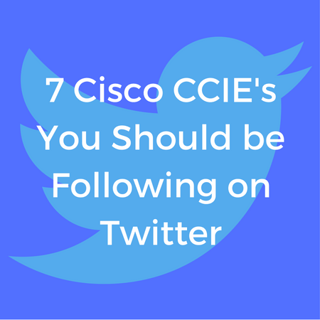 Self-described influencer, and networking nerd from Norman, OK. Hollingsworth makes reading about networking entertaining --that is if you are into snark.

SIP: Because There’s No RFC For Dumpster Fire.

Tom is a thought leader in IT Networking with a cynical and acerbic wit. He is the organizer of the Tech Field Day event series which focuses on networking/wireless events.

Banks is an industry veteran and “Interview of Nerds.” He has a successful IT podcast called Packet Pushers.

Folks, "SDN" as a term is utterly bankrupt and devoid of meaning. Shift the conversation to business requirements and solutions. #NFD11

Banks is definitely a thought leader in the industry and has quite a following. He has over 20 years IT experience as a network architect. He is a frequent speaker at Interop. He co-hosts the Packet Pushers podcast. He also writes articles for various tech websites.

Sequeira started out at IBM in 1994. Left to start his own, successful consultancy company before finding his true passion, writing, and training for Cisco.

Why did the TCP packet go to Las Vegas? He heard it was SYN City! @amyengineer pic.twitter.com/6wWbQ7qonN

Anthony is a prolific author for Cisco Press. He is a trainer for CBT Nuggets.

Aseel is passionate about tech and marketing. She is studying computer science at PSUT

She is one to watch. At 18-years-old Aseel Othman is the youngest female CCIE in the world.

A writer of many tweets, blogs, and study guides.

He is an influential blogger and writer in the IT field. Of late, he has become outspoken in his advocacy to see changes in CCIE testing.

McGahan was one of the youngest engineers obtain his CCIE in R&S. He achieved that goal in 2002, at the age of 20. He has since forged a successful career in training.

Laurent is the Worldwide Director of Engineering for Enterprise Networking @Cisco

Andre is a fixture on Cisco Live. He is a prolific speaker and prominent figurehead for Cisco.

“what truly drives me is people and the possibility of helping them realize lasting impact and meaningful change.” ~Andrew Laurent Cisco

In researching, we found many other CCIEs worthy of following on Twitter and many still, that do not have Twitter accounts.

The seven we profiled here are some of the most prolific, writers, bloggers, speakers, and executives. They are in all phases of their careers and each one has an interesting and unique take on CCIE and the state of IT, in general.