Explosive Growth for the Cloud: Why Companies Use Monitoring as a Service

When you think of anything in business exploding, you might want to take a step back and consider the situation. Why? What could be so volatile about a growth pattern that we'd use such a strong verb? Well, we were digging into the idea that cloud monitoring as a service would grow rapidly in 2017, and we were glad to find why this market merits this action verb.

First, here's a bit of background:

CMaS: Monitoring All of Your Company's IT Infrastructure 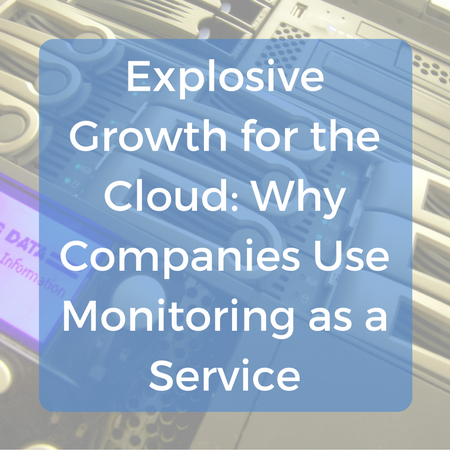 According to Hacker Noon, cloud monitoring as a service (CMaS) is an on-demand service that businesses use to manage their IT infrastructure and monitor their resources. So, in the cloud, a company can maximize the information provided by "end-to-end monitoring." Essentially, no server goes unmonitored. All that an IT technician has to do is look at a dashboard and then assess how all IT resources based on cloud servers are presently performing and which applications are available. This is important because having applications that are not available or resources that are not being backed up will affect a company's business continuity and, in some cases, general employee productivity.

Cloud monitoring as a service sounds like it's pretty straightforward, just like monitoring for unauthorized log-ins to servers, but there's actually a lot to it. This is primarily because a company could be using multiple cloud servers (which may be hosted by different third-party providers) as well as some of its private cloud servers. It must ensure that all of these servers are monitored continually. A cloud monitoring dashboard is also about ensuring the optimal performance of all cloud-based servers. For example, the system wants to ensure that there is little downtime for servers, and, when this occurs, that it is not at a peak time when many employees will be using them.

Writing in late 2016, CIO.com quoted Forrester Research, which that found that the explosion in the cloud market (public and private) is happening. According to Forrester analyst Dave Bartoletti, 59 percent of 1,000+ survey respondents indicated that their organization was moving to a hybrid cloud model in 2017. Bartoletti also offered the example that "a cloud architect for a large software company shaved $300,000 off of a $2.5 million cloud bill by monitoring his consumption." This means that companies of every size will depend on cost management tools, which takes the idea of cloud monitoring beyond being a simple reporting system to a strategic business tool. If a company can figure out how to leverage its mix of cloud servers and keep its costs contained, it can maximize the benefits of the entire system.

In addition to containing costs of operating servers in the mix of private and public clouds, companies also use cloud monitoring as a service to identify key issues with their IT infrastructure. This goes beyond just assessing at any point in time what certain servers are offline. From a security standpoint, if a hacker gets into a cloud network, a cloud monitoring service can identify how many servers have been compromised and, if the software is very effective, the kinds of data that have been copied. IT personnel can also try to identify the hacker's point of entry. Having these kinds of surveillance tools is crucial to organizations in the public and private sectors that must legally safeguard protected health information and other forms of consumer data. When hackers gain access to a private network, they can quickly copy millions of records, which then creates huge potential losses for the organization.

The Growth of Household Consumers of Cloud Services

Another driver behind the growth of everything cloud is that residential consumers are increasingly building their own Broadband-connected networks and connecting their homes to IoT applications. They want to have more Internet-connected apps accessible from their smartphone and to know what is going in their home when they aren't there. This creates a whole new set of security issues for not only a home alarm system but for the residential consumer's cloud-based network. SDM Magazine's Karyn Hodgson writes about the state of the market for the video surveillance, alarm systems and monitoring, access control, fire alarm, and connected home industries. She explains below:

"An ongoing question for the security industry is how — and how much — of the new connected home products to offer or control, or just how open to be. Do you lock down home control products so only the dealer can sell to homeowners or allow the homeowner to purchase some things on their own? It comes down to how much control you want to allow the customer in choosing their own technology."

This is basically the same question that businesses must decide from their standpoint as cloud consumers. How many of a company's servers should it move to the public cloud or to the private cloud? What's more, when we come in and can help them with cloud monitoring technology regardless of the mix of public and private cloud networks they choose, how do they maintain control? Our clients can use our SaaS for greater monitoring capabilities even while expanding their cloud usage in 2017 and beyond.

The Future is Bright

We believe that cloud monitoring as a service will continue to evolve as companies and private consumers try to maximize their public, private, and hybrid cloud models. We continually update our software to ensure that business organizations are well-protected and prepared to maximize productivity while keeping control of all cloud server operations.