The Cloud Then and Now

The cloud then and now

Imagine a world without cloud computing. For some of you reading this blog it’s easy to imagine as only a few decades ago this was a reality. This was a time where smoking in your office was the norm, you typed all of your documents on the type writer, and calling the landline telephone wasn’t considered strange.

The work time to complete a task back then compared to now was almost double if not tripled. Fast forward a couple of years later to the mid 80’s and the internet was born, starting the beginning of the technology boom. And now, the strongest trend is towards cloud based access of applications and resources.

Today the top five common uses for the cloud are as follows:

Before cloud computing every application that you owned had to reside to a dedicated server. And the company had to buy that server and keep it maintained whether the application was using it or not. 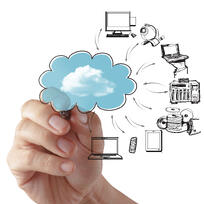 In 2014 a recent report done by the Neovise group found that 54% of organizations are already using public or private clouds, still leaving plenty of room for industry growth. Among the 161 businesses that took the survey 74% of them were using more than one IaaS type of cloud service.

If you think about one  application that virtually everyone uses like email, we are seeing more and more enterprise organizations moving away from dedicated on-premise servers like Exchange, and moving towards MS Office 365 or similar.

Cloud computing users no longer have to purchase expensive servers and software out of the Capex budget. Now, they simply sign up for a term-based contract and can get started almost immediately.  Still other companies we talk to are going a step further and using a free email system like Gmail as their corporate email.

While I don’t think this will become the norm for most companies, it does show that organizations are thinking about such possibilities - and for some, the cost savings are so dramatic they can’t stay away. There is no doubt, that trends like this are not going to reverse any time soon; but hopefully we see an acceleration towards migrating traditional enterprise applications to the cloud.

As a result of cloud computing applications it’s now much easier to access information from anywhere at any time. Anywhere in the world there is an internet connection, people are able to do their job. For instance I could be writing this at home, in a Starbucks, or even on a boat in Zimbabwe right now and you would not have any idea.

They say that in the year 2020 there are going to be 50 billion devices in the world, that’s astronomical if you really think about it. Most of these devices will be interconnected in some way, and the majority of them will likely be accessed remotely on a needed basis. The cloud is hailed as the wind of change for everything related to IT, and the highlighted benefits are its cost efficiency, easier deployment and effortless provisioning.