While government agencies must by their nature be somewhat more conservative in utilizing new technologies, cloud-based network monitoring has reached a level where it hasn’t yet been widely adopted, but has all the rigorous testing and tweaking necessary to make it a safe bet.

With that in mind, many agencies have begun considering a move to the cloud for their network monitoring—and those which haven’t ought to.

Here’s a few of the considerations that make this a worthwhile move: 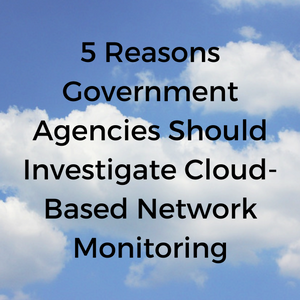 No government agency can afford to ignore cybersecurity in the modern era; as proven by recent events in the U.S. presidential election, any body public or private may find itself under attack from outside forces. Even organizations which don’t hold any data of particular importance may find themselves subject to cyber intrusions, even if the only goal of the perpetrator is to find personal communications and embarrass or pressure individuals.

Cloud-based network monitoring offers real-time 24/7 analysis of network traffic to identify intrusions and suspicious traffic before they succeed. Where cybersecurity may once have served as an argument against widespread adoption of cloud-based monitoring in the past, the benefits to overall security and proven reliability of the technology for sensitive matters makes a strong argument for its adoption by governmental groups moving forward.

With many government agencies facing cutbacks and budget shortages, efficiency has never been more important. Not only do the improvements to network monitoring efficiency through a cloud solution allow a firm to keep up with its commitments with a tighter budget and reduced staff, doing so will help protect against future cuts and criticisms based on inefficiency.

Part of the reason government agencies should be giving cloud-based network monitoring their consideration has little to do with the specific benefits of cloud-based monitoring, and everything to do with their critical need to modernize dated systems.

It’s worth considering the relative ease of maintaining modern systems with a cloud-based solution compared to an in-house one. A good cloud monitoring provider will be upgrading their systems on a regular basis to stay competitive, which means government agencies availing themselves of such services to handle network monitoring will gain the benefits of regular upgrades with far less fuss and expense.

In some agencies, hardware isn’t as consistent as one might hope—a problem which can introduce major headaches when looking at software to use across the board. Cloud-based SaaS network monitoring largely ignores this issue, as most cloud-based solutions do. It also makes it easier to make hardware upgrades without disrupting operations.

As long as an agency makes sure it’s working with a network monitoring service provider adherent to the appropriate regulations, it will essentially have the headaches of regulatory compliance completely removed from consideration. As upgrades and adjustments for new regulations arrive, so too will changes in the service.

Cloud-based network monitoring has already largely proven its reliability and efficiency in the private sector.

It’s a prime time for any forward-thinking public agency to begin adopting this tested, reliable solution to some of the trickiest problems in network monitoring.